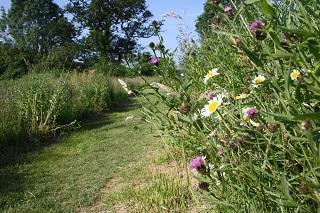 A recent consultation held by South Hams District Council, has had overwhelming public support for its plans to increase biodiversity and wildlife value by at least 10%. The proposals to rewild some of the 50 hectares (Ha) of council-owned land are part of the Council's commitment to stop biodiversity loss.

A report of the findings will be heard at Executive on Thursday 14 October.

The Council had a huge response to the consultation with over 1,000 respondents, with almost all replying positively (97%) in favour of improving biodiversity in the District.

A large proportion of replies (90%) were also happy with proposals to relax grass-cutting regimes, leaving areas of long grass along the verges and edges of parks, as well as introducing planting of new areas of wildflowers.

These proposals would mean 10Ha land of wilder green space, 3.5Ha of wildflower areas and 3.5Ha of new tree planting. These small rewilding areas could support pollinators, along with a range of diverse wildlife such as reptiles, amphibians, birds, small mammals, and bats.

There was also a range of varied and excellent suggestions from the public to incorporate into proposals as they evolve.

Executive Member for Climate Change and Biodiversity, Cllr Tom Holway, said: "I'm delighted that so many people have engaged with this consultation because it's such an important issue. Rewilding is a great way to make a big difference to biodiversity at a local level, even with the small amount of land that we're talking about.

"There is still a great deal to plan and put into place, but with public support, we're well on our way. It's very exciting to think how these habitats will change and grow for the benefit of numerous types of wildlife.

"It would be wonderful if residents also embraced the rewilding idea in parts of their gardens too to really make the biggest possible impact to the District. We can all do our bit if we ensure less frequent grass cutting, more wildflower planting and, where we can, allocate some space to pond areas in our gardens, this will all help to support insect populations and absorb carbon from the air."

Now that the consultation has returned a favourable response to the idea of rewilding, a proposals green 'grass' site map will be created using the Council's Interactive Map feature. Further consulting with councillors, Town and Parish Councils over the specific detail of proposals will then take place to ensure the approach fits with the aspirations of local residents and to assess their impact within each community.

The full report can be found here.

A further report will come back to committee in January with the next steps.