£9 million regeneration plans for Ivybridge will progress following a meeting of the South Hams Full Council today. Councillors agreed to take forward the proposals, which are hoped will result in an economic boost to reinvigorate the town. 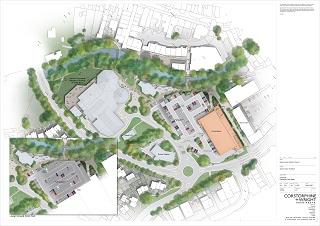 At the Full Council meeting, Councillors closely examined the risks involved as well as the technical and economic viability of the project.

The regeneration plans include developing Leonards Road car park to include a discount food store, a proposal widely supported by local people. It is estimated the proposed store could create around 30-40 jobs for local people, with up to 100 shoppers able to use the store at any one time who are anticipated to make shared trips and use other town facilities. This is supported by 90 minutes free parking offered at the store, although average store visit are 30 minutes.

It was agreed the plan would succeed in regenerating Ivybridge town centre and should now proceed to the detailed design stage required ahead of any planning application being made. If the project proceeds through to construction, the cost to the Council is £9 million.

Cllr Hilary Bastone, South Hams District Council's Deputy Leader, said: "The decision to make this significant investment in this project is good news for everyone. Many people have been involved in developing these proposals, including Ivybridge Town Council and Ivybridge Chamber of Commerce. The ongoing close consultation with local stakeholders means we can be confident we have a proposal, which truly represents what local people want and need.

However, we know there are still many hurdles to overcome, including the formal planning stage. That's why it's really important to us that we continue talking with the people who live and work in the town and keep on discussing this project. By signing up for emails and getting involved, local people can make sure their voices are heard and give Ivybridge the boost it deserves."

Councillors listened carefully to public feedback when residents said that they didn't want a drive through or pub included in the Ivybridge regeneration proposals.  As a result, the proposals are for a smaller scheme which concentrates on key priorities to boost the town's growth.

Local residents and businesses can stay up-to-date on the latest news and find out more about the plans by signing up for emails at: www.public.govdelivery.com/accounts/UKSWDEVON/subscriber/new

There is also a dedicated website, with links to reports and previous consultations regarding the proposals. To find out more, take a look at: www.engagement.southhams.gov.uk/ivybridge-regeneration-project